The banner above is an advertisment - if it asks you to download software, please ignore.
Site News - 10/5 Photo of the Year Winners 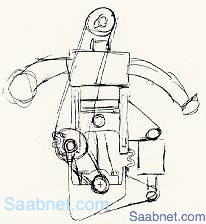 Per Gillbrand's very first sketch of the SVC engine.

The SVC concept, which has been developed by Saab's engine designers, features a unique system for varying the compression ratio, which makes it possible to cut fuel consumption without weakening performance. It also allows the engine to run on fuels of different types and of varying quality.

The SVC concept represents a leap forward in the development of the Otto engine and will provide a new platform for future engine development. The fact that the compression ratio is now a variable parameter opens vast new opportunities for more accurately controlling the work of the engine, therefore improving its efficiency.

The new engine concept will be displayed at the Geneva Motor Show, opening February 29,2000.

Return to the Press index
Return to The Saab Network