The banner above is an advertisment - if it asks you to download software, please ignore.
Site News - 1/6 Saab Owners' Convention 2023

Aside from all of his accomplishments with Saab, Mr. Millet was also a highly respected spokesman for the imported car business in the United States as President and Chairman of the Automobile Importers of America, a group representing most of the companies importing automobiles to the United States.

When Saab automobiles were first introduced into this country in 1956, it was quite a different automobile from those generally sold here. The car's origin and the management of its importing company were also somewhat different than what is common in the US auto business.

The first Saab cars were powered by an unorthodox two-cycle engine that required the addition of oil to the gasoline every time the fuel tank was filled. Unlike most other cars, the engine propelled the front wheels, instead of the rear wheels. Saab automobiles were manufactured by a company called Svenska Aeroplan Aktiebolaget (abbreviated Saab), that had previously been solely engaged in the manufacture of military aircraft.

Heading the U.S. operation was not exactly your usual "car guy" but an aircraft expert. Ralph Turner Millet had had no previous experience in the automotive field, but would eventually become the representative for almost all of this country's automobile importers, and steer his adopted company and its unorthodox product through more than 15 years of business ups and downs.

Ralph T. Millet saw the little Saab car become something of a cult car, as well as one of the leaders in the field of automotive safety, before he relinquished his position as head of the importing company. Mr. Millet then became a consultant to the company, and its spokesman in safety and environmental matters.

As Mr. Millet recalled it, the actual origin of Saab's entry into the US auto market came at a dinner in Minneapolis. After a meeting with aircraft component suppliers, the head of Saab turned to Mr. Millet, at the time a purchasing agent for Saab, and said that since Americans were buying Volkswagens, maybe they would also buy Saabs. Mr. Millet said that he seriously doubted the viability of selling a car with a two-cycle engine in the U.S., but the next day, back in New York, the Saab president persisted.

"He told me to reserve some space at the next New York Auto Show. He would send some cars over, and we would see what reaction they got. Then we would decide about selling the cars."

A few months later four Saab 93 sedans and a prototype sports car arrived in New York, just in time for the 1956 New York International Auto Show. At the show itself, the reaction of both public and press was quite positive, and several auto dealers expressed their interest in representing the new Swedish make. One even bought a car for resale. Ralph T. Millet was about to change careers, from a specialist in procurement for the aircraft industry, to the job as head of the country's newest imported car company.

That dinner meeting in Minneapolis was not really Ralph T. Millet's first encounter with Saab cars. Born in Boston on August 21,1917, Mr. Millet was educated at the Boston Latin School and received a degree in aeronautical engineering from the Massachusetts Institute of Technology in 1940, just in time to join the U.S. Army Air Corps, where he reached the rank of lieutenant colonel. After the war he started a firm handling procurements for different corporations, one of them Saab. During his first visit to Sweden, in 1946, he heard of the company's plans for a small car, and one of his earlier assignments for Saab involved the purchase of body presses for the new car. In 1948, he recalled, an early prototype car was sent to the U.S., and Mr. Millet had some discussions with the Willys Overland Company about building the car. One early problem for Saab, however, was the shortage of suitable steel for the car bodies. It wasn't until 1950 that the first Saab car built was sold, and not much was thought of exporting it until production reached adequate levels.

But after the 1956 New York Auto Show, Saab Motors Inc. was ready for business. The first shipment of cars for sale to dealers arrived just before Christmas 1956 at the port of Hingham, MA, where Saab had established a warehouse and vehicle preparation facility. Fifteen dealers were signed the first year, and sales reached all of 2,200 units in 1958. "We made money in 1959," recalled Mr. Millet, "but the next year the bottom fell out, when Detroit's Big 3 introduced their own small cars."

In 1961 Saab Motors moved all of its operations to New Haven, CT, leaving only a small aviation purchasing office Đ the operations Mr. Millet had originally started Đ in New York City.

The safety reputation of the Saab car has helped sell Saabs throughout the years, as the cars have gradually evolved, first by replacing the original two-stroke engine with a more acceptable four-stroke, and later with newer and larger model cars. Today the company, now Saab Cars USA Inc., owned by General Motors, sells two distinct lines of cars, the 9-5 and the 9-3.

Safety has always been a major feature in Saab's marketing efforts, and is something that has been the subject of Mr. Millet's interest for many years. When the government stepped into the field of auto safety in the late 1960's, Mr. Millet was one of the first representatives of the auto industry to be appointed to the new Highway Traffic Safety Advisory Council of National Highway Traffic Safety Administration. At about the same time, the first trade organization for the imported car industry was founded and Mr. Millet, after originally just representing Saab, eventually became president and chairman of the Automobile Importers of America. As spokesman for the imported auto industry, Mr. Millet was for many years a frequent testifier before congressional and other legislative bodies on matters relating to imported cars. He remained the Saab representative with the trade group; today called the Association of International Automobile Manufacturers, until quite recently.

In 1982, Mr. Millet was named to the Board of Directors of the successor company to Saab Motors Inc., Saab-Scania of America, Inc., which by then was involved not just in Saab automobiles, but also built and marketed Scania trucks and buses. Mr. Millet was heavily involved in establishing the Scania business in the US, initially in assessing the market possibilities for Scania products, and later in helping set up marketing and manufacturing operations in the U.S. During the 1980's, Scania operated a complete assembly operation in Orange, CT, making city busses for a number of different U.S. municipalities.

Always interested in Saab even after his retirement, Mr. Millet has been a frequent visitor at Saab dealer functions, as well as at Saab owner conventions, both in this country and overseas. Most recently he and his wife, Gunlog, attended the dealer preview of the all-new Saab 9-3 cars in Sweden this past summer, and the annual Saab Owner's Convention in Cincinnati, OH, in August.

An active churchman, Mr. Millet was a lifelong Episcopalian, and was Senior Warden Emeritus, as well as treasurer of the Grace Memorial Church in Old Saybrook, CT. 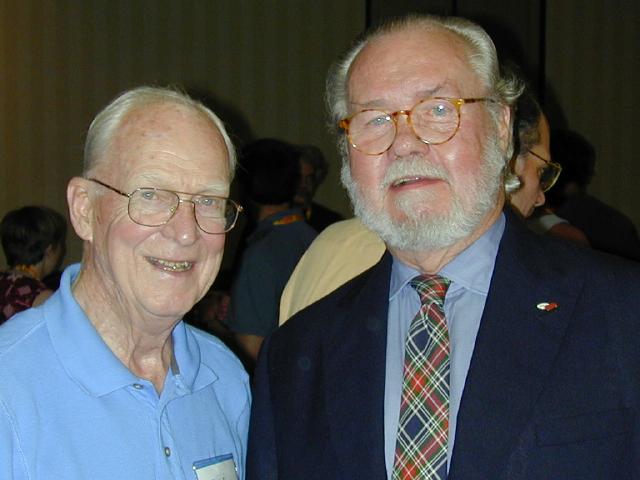 Return to the Press index
Return to The Saab Network